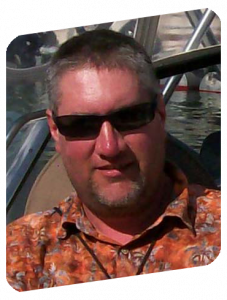 I have never been a great employee. I prefer to lead and guide businesses than be a cog in someone else’s machine, even if it is a successful machine. I first learned how to manage people, make a profit, and meet goals when I became part of a management team at Domino’s Pizza whose only goal was to take over failing stores and return them to profitability. Our team developed a reputation for being able to take even the most forgotten of stores and turn them into profit-making operations.

Eventually, I left the pizza business. The hours were terrible for raising a family. In the mid 90’s I went back to college and earned a Bachelor of Arts degree in Architecture while opening my first retail store at the same time. Dragon’s Lair was a gaming and comic book store in Albuquerque, NM that lasted just 9 months before we made the call to close it before it ate through all of our money and started affecting our ability to do things like pay our mortgage. Out of all the things I have done over the years, this is easily our biggest crash and burn and also easily the one that taught me the most about running a profitable business.

After New Mexico, we relocated to California where I published a gaming magazine (VrE Online), opened a tech company focused on hardware assembly, networking, and technical support (NeoTek Computer Systems), started building websites, and spent a lot of time raising our daughter while my wife was off doing her duty with the USAF. Then it was off to Indiana where I kept the tech company, was made a partner in a web hosting company (ForTheWeb), learned to design and make jewelry (Images Jewelers) until the economy took a hit in 2008.

At that point, I rebranded NeoTek Computer Systems as Steam Driven Media and began working full-time in the web development and internet marketing field again. Since then I’ve built hundreds of websites, helped over 100 clients and small businesses promote themselves online, and began mentoring up-and-coming people in the industry.

I started my career in tech all the way back in ’81 or ’82 when I convinced my dad that a 4k Tandy Color Computer was a much better family Christmas gift than an Atari 2600. From that moment on I knew I was going to be using computers in some way because unlike my sisters, they actually did what you told them to do. And when they didn’t do what you told them, there was usually a good reason. In ’84 my high school added a computer lab with a room full of Apple ][ c computers and I started meeting like-minded people. Being a nerd was starting to be fun.

Shortly after that, we bought our first modem, not an acoustic couple, I’m not that old, but a neat little 300/600 modem, and the world of northern Indiana opened up to the entire world. Soon after I discovered the world of BBS’s I wrote my first piece of software based on something I had seen written for the Apple ][ and didn’t have the money to buy for the Tandy, my own war dialer. For those that don’t know what that is, it’s a useful tool that dials a series of phone numbers and listens for a modem. No modem, it moves on to the next number, finds a modem, it writes that phone number to a text file for later use. It is possible that I used a lot of late-night modem time dialing into random modems just to see what was on the other end.

Anything else I may, or may not, have done at that time is almost certainly beyond the statute of limitations by now, besides, I was a juvenile then, so, uh, yeah. Enough about that.

On the BBS scene, I discovered that I was learning fast and that even at that age I was enjoying sharing what I was learning with people coming in behind me. Another skill that would seem to grow and follow me for the next few decades.

I was very involved in the BBS scene from the late 80s through the mid-90s. I ran two boards of my own and was a Sysop on a few more. We ran multiple software packages back then. TriBBS, RBBS, Wildcat!, Telegard, even Searchlight for a while. From here I got into the Warez scene. Around ’93 I was even the host of a zero-day BBS in New Mexico. It was a very different world online back then.

About this time I started my first tech company, NeoTek Computer Systems. Primarily a hardware company, I was designing and installing networks for small businesses. Most clients were under 20 workstations, but some were quite a bit larger. I ended up being fluent in Novel, WinNT, Unix, plus a few others that stopped existing a very long time ago. The hardware business was great until a little company called Dell started crushing all of the little independents with the help of Intel and their ridiculous wholesale process.

I also started working with a man named Joe Niderost and we began publishing a DOS-based series of digital magazines around ’92 or ’93. These were elaborate batch file-driven magazines until were started building them in Macromedia Authorware. In ’96 we migrated to our own website (which still exists) VrE Online.

Somewhere in all this madness I also managed to get a Bachelor of Arts degree in Architecture from the University of New Mexico and opened a comic book store called Dragon’s Lair. The comic book store lasted all of 9 months (be careful who you choose for a partner and how much you spend on rent when starting out). I was never able to get my Master in Architecture because the USAF shipped us off to somewhere that didn’t have a university close enough to go to school for that.

The late ’90s became a hectic 5 years for me. In 97(?) I became a partner in a new ISP called ForTheWeb. It has long since gone away (a victim of the first .com boom) when it became nearly impossible to offer paid hosting at what it actually cost when all of the low-cost providers started appearing. As the partnership slowly broke down, I do regret not being able to keep that domain name.

Our biggest creation at ForTheWeb is that I think we build one of the very first automated content and cloaking tools. We may have had some friends at Yahoo! and we were discussing content and SEO and how to rank quickly. Back then you could actually make a change and get reranked by some search engines in nearly real-time. It was AWESOME! What we ended up doing was creating an admin tool for every website that we built for ourselves and for clients. The tool allowed you to enter a few keywords/phrases and click submit. The tool then autogenerated thousands of pages stuffed with content that was interlinked with each other, the cloaked it all so that only the search engines could see it, and then pinged every search engine in existence to get crawled. We were able to rank sites for some impressive terms in days. For those of you caught up later in all the cloaking drama, sorry about that 😉

Shortly after we built our cloaking tool some little search engine you may have heard of started making waves on the internet. It didn’t take them long to start putting out guidelines and trying to make the internet easier for them to crawl all under the guise of sending you traffic. We all see how that has worked out for the internet.

My hardware company was also quite busy at the time. This issue called Y2K(?) was causing no end of grief in a lot of markets and we spent months prepping for it. Everyone likes to say it was all panic for no drama. But that makes no sense. The reason there was no drama surrounding Y2K was precisely because of the work a lot of IT departments did to make sure that it wasn’t a thing we had to worry about. Even my dad was slightly panicked and built an underground shelter and filled it with enough supplies to last 10 years. Really.

I did more in the ’90s, but I’m old now and that was over 20 years ago. Just let it be known that apparently, I was part of the old guard at some point.

In the early 2000s I started transitioning away from network work and spending more time doing full-stack web development and marketing for more clients. I rebranded from NeoTek Computer Systems to SG Design Studio, my architectural design brand from the ’90s. I would love to say that things were awesome and I helped break ground, but I spent most of my time being ‘adjacent’ to a lot of cool things happening.

I also started mentoring a fair number of newcomers to the SEO field. I spent most of my time on several SEO and Web Dev forums such as WebProWorld, SEO-Shop, and so on as a moderator or admin. Back then I was still using my public handle Feydakin.

The 2000s were also when I spent most of my time in the affiliate world and more profitably, in the directory world. At one point I owned or partnered in well over 100 link directories or article directories. I was one of those guys. Initially, I built the directories just to build links for clients and friends. Then I started seeing that little green bar from Google reach as high as 7 on some of the directories. That’s when straight-up selling links really took off. Again, thanks to Google telling everyone that links were important and then giving us a green bar that we could point to and use as a selling tool. The single most profitable directory was a gambling directory where the top links were auctioned off every month. And if you got outbid during the month you got an email offering to let you pay more for that top spot. There were months when a single link was going for several thousand dollars. No lie, the money was good.

Around 2003 or 2004 Google announced that directories and paid links were no longer tolerated, after creating the market to begin with. As more and more websites were hammered with devalued links and straight penalties for paid links, several of us discovered that you could use those same links for the first real negative SEO attacks. It took us crashing people’s websites and long talks with a few Googlers to convince people that this was a thing you could do. Sorry about being part of the reason that the nofollow attribute happened.